The Old City of Dubrovnik is encircled by a massive wall.  The city wall, together with three attached forts are referred to as the Dubrovnik Fortification.  The fortification also includes two free-standing forts not attached to the wall.

Visitors to Dubrovnik can enjoy a pleasant walk along the two kilometer wall.  The wall runs along the seafront, through the forts and along the hillside.  It takes approximately one and a half hours to complete the walk.

The Dubrovnik fortification is the most popular tourist attraction in Dubrovnik Croatia. 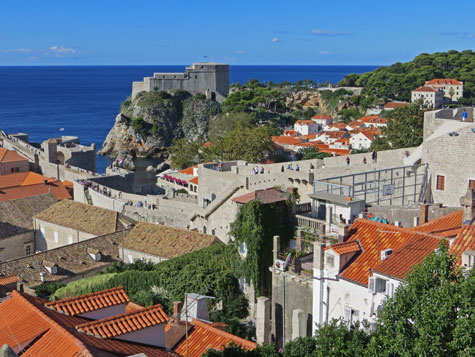 The city of Dubrovnik levies a small fee for those wishing to walk the wall.  A ticket entitles the visitor to enter the fortification only once.

If you visit Dubrovnik during the busy tourist season, particularly when cruise ships are in port, it is a good idea to begin your walk either first thing in the morning or later in the afternoon to avoid heat and congestion along the route.

There are three entrances to the Dubrovnik City Wall.  They are at near Pile Gate, St. John Fort and next to St. Luke's Church.  Pile Gate is generally the most congested.