Pile Gate in Dubrovnik is the well-fortified entrance way to walled city of Dubrovnik.  It is located on the western side of the city wall and is protected by both a moat and hilltop fortress called Fort Bokar.

Because Fort Bokar was armed with a series of large cannons, it was extremely difficult for ships to approach Pile Gate from the Adriatic Sea. 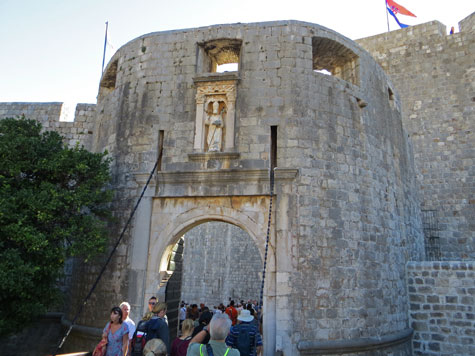 Most visitors to Dubrovnik will pass though Pile Gate because the city bus terminus is located just outside the gate.

A statue of Saint Blaise can be seen directly above the entrance.  Saint Blaise was the patron saint of Dubrovnik.